None of the 32 players who’ll make up the 2019 Lexington Challenger field a week from today are among the world’s Top 100 – YET. But, you can bet some of them will be by next year.

Take last year’s Kentucky Bank Tennis Championships winner Lloyd Harris, who competed here as the 6-seed with a #216 ranking. A year later the South African is ranked No. 82. Recently, Harris reached the French Open 2nd round with a 5-set victory and put a brief scare into Roger Federer by winning their 1st set 6-3 on Centre Court Wimbledon.

South Africa’s Kevin Anderson – now at No. 11 – got no further than Lexington’s 2nd round in his three attempts, dating back to 2006, ‘07 and ‘09. And, No.21 Milos Raonic of Canada had to retire 2nd round in his lone 2010 appearance. Both Anderson and Raonic, as well as Isner were seeded at Wimbledon a month ago.

And, all three have previously cracked the Top Ten in the World! (Roanic was a career-high #3 in November, 2016; Anderson #5 earlier this year; Isner was #8 in July 2018 after reaching the Wimbledon semis.)

So, tennis fans, to identify some of the best rising talent in the world, you’d do well to come out often to the Boone Center, July 29-August 4.

Here are the current world rankings of the men we call “Lexington alumni.” (We’ll have the female alums in a separate story). An asterisk (*) denotes a LEX title-holder:

21 – Milos Raonic, Canada – retired to Alex Kuznetzov here in 2010 2nd round; was #14 early this year; but fell in Australian quarters and Wimbledon 16s to lower seeds.

56 – Juan Ignacio Londero, Argentina – lost 2016 LEX 1st round to Kuznetzov; this year reached French Open 4th round. By virtue of runner-up Swedish Open finish yesterday, he had highest jump in rankings among our “alums” of 15 spots from previous week!

70 – Tennys Sandgren, USA – a Tennessee Vol at No. 3, he struggled to qualify here for several years; making main draw in ‘12, he lost to eventual winner Denis Kudla in 2nd round; his best LEX showing was 2013, losing to Bradley Klahn in quarters. Really made name for himself at Wimbledon ‘19, taking out seeds Giles Simon and Fabio Fognini before losing rd-of-16 to American Sam Querrey in close 4-setter.

71 – Alexander Bublik, Kazakhstan – lost in 2017 quarters here as 2-seed. But, yesterday was runner-up to Isner 6 & 3 in Hall of Fame Final at Newport, giving him a 12-spot jump in the rankings!

94 – Bradley Klahn, USA – as 5-seed, lost in our 2013 semis to 6-seed James Duckworth. Klahn won the 2010 NCAA singles title as a Stanford sophomore. He had the biggest drop this week among LEX alums, 10 spots.

DROP SHOT: American Denis Kudla was almost the fourth former Lexington Challenger champ to make the Top 100 this week, but he fell one spot to 101 from the previous rankings. A good example of perseverance at the Challenger level, he lost 1st round here a couple years before taking the 2012 Lexington title. As the 4-seed he defeated 8-seed Erik Chvojka of Canada 5-7, 7-5, 6-1 in that final. Kudla reached the 4th round of 2015 Wimbledon; and 2nd round of US Open and Australian five times, including the latter this year. His career high is #43, coming in May 2016. 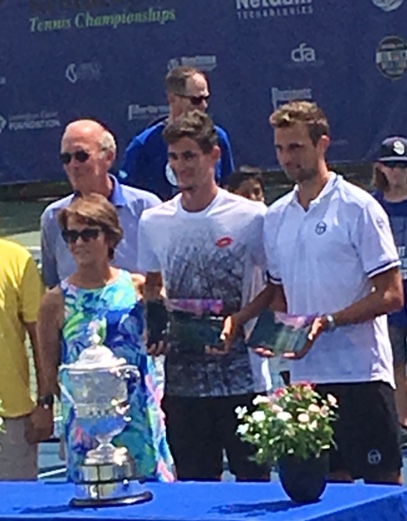